Marvel and Hasbro released a series of Captain Britain action figures recently. One is featured in his "modern" outfit worn from the 1980s through (at least) the 1990s. The remainder were offered as a tie-in to the Captain America: The First Avenger film. There are two variants--one in his New Excalibur costume and one in his Captain Britain and MI:13 costume (apparently a K-Mart exclusive)--and both come bearing Excalibur. The three figures are pictured below in an image from ItsAllTrue.net. 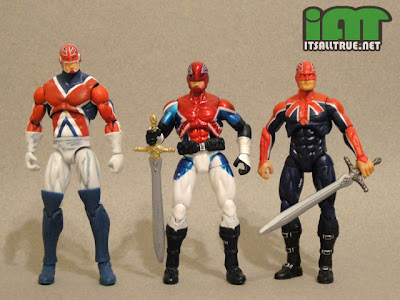 Additional reviews, details and images at the following sites:

Posted by The Virtual Society for the Study of Popular Culture and the Middle Ages at 11:22 PM No comments:

The End of Knights of the Living Dead

SLG Publishing is now offering Nos. 5 and 6 of Knights of the Living Dead, the final two issues of the series. Details and ordering information at http://www.slgcomic.com/knights.
Posted by The Virtual Society for the Study of Popular Culture and the Middle Ages at 10:48 PM No comments: