Lilly's The Adventures of Wiglaf and Mordred 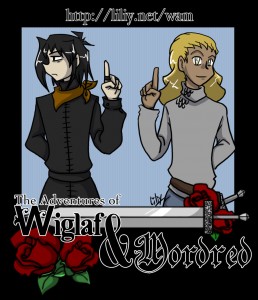 I recently came across the webcomic The Adventures of Wiglaf and Mordred drawn and written by Lilly since October 2005. The About section of the website includes the following details on the series:

Join Wiglaf and Mordred as they try to maintain their friendship through world domination plots, jealous siblings, employees with more secrets than they let on and of course the lies that the two tell each other. With a cast of colorful and unique characters, you’re sure to be entertained.

Or so says the Advertising Campaign if you wanted a nutshell summary. If you want something a bit longer:

The Adventures of Wiglaf and Mordred (aka WaM) follows the story of a lonely hero and an apathetic villain who find out they have more in common than they thought as they explore their relationship with each other and the people around them. They”ll meet up with friends, parents, siblings, rivals and all sorts of other interesting characters as Wiglaf and Mordred try to get along in a world that allows Dragons to stand side-by-side with Super Intelligent AI Computers- But that’s just the tip of the ice berg:

Snark is their friend.
So dive in, read, laugh, smile and get to know their world. Most importantly, however, make sure to watch out for the Security.

Because he’s definitely watching you.

Posted by Blog Editor, The Association for the Advancement of Scholarship and Teaching of the Medieval in Popular Culture at 2:08 AM No comments:

Christina Francis on Arthur, King of Time and Space

Christina Francis has an essay in in the latest issue of Arthuriana on the webcomic Arthur, King of Time and Space. The essay can be accessed in Project MUSE. The complete reference is as follows:

Abstract:
By developing characters with unstable and changeable sex identification, Paul Gadzikowski creates an Arthurian world with fluid gender boundaries in his webcomic Arthur, King of Time and Space. The effect of this fluidity is a cast of Arthurian characters that continuously confronts sex and gender stereotypes, inviting audiences to reconsider their own assumptions about sex and gender.
Posted by Blog Editor, The Association for the Advancement of Scholarship and Teaching of the Medieval in Popular Culture at 7:35 PM No comments:

It is with deep regret that I write to inform readers of the demise of the following listservs sponsored by the Society: The Society for the Study of Popular Culture and the Middle Ages Discussion List, The Medieval Studies at the Movies Discussion List and The Medieval Comics Project Discussion List. The three have been disbanded due to lack of interest by the members. Archives for these lists will remain online for the time being, but further items of interest on these topics can be found instead on the various blogs currently sponsored by the Society, including Studies of Popular Culture and the Middle Ages and The Medieval Comics Project Blog.

Michael A. Torregrossa
Blog and Listserv Editor
Co-Founder
Posted by Blog Editor, The Association for the Advancement of Scholarship and Teaching of the Medieval in Popular Culture at 12:40 AM No comments: