DC has recently released the second volume of J. T. Krul's initial run on Green Arrow. As posted previously, the story features a character named Galahad and also Arthurian mainstays Jason Blood and Etrigan. Galahad does not (in the end) turn out to be the Arthurian figure, but his arc recalls that of both Parry in The Fisher King and David McIntyre in Babylon 5's "A Late Delivery from Avalon", in that he has retreated into an Arthurian identity following a traumatic experience and very much lives up to that ideal in his ongoing quest to protect the essense of the White Lantern in this tie-in to The Brightest Day crossover event.

Here are the details on the two collected editions:

A new era begins in this title spinning out of BRIGHTEST DAY, from the first six issues of the hot new series. After Star City was devastated by an attack by the villain Prometheus in the pages of JUSTICE LEAGUE: CRY FOR JUSTICE, the White Lantern Ring gave birth to a massive, mysterious forest located at the center of the destruction. Now, Green Arrow lives in the woods and strikes against crime and corruption as a modern day Robin Hood. 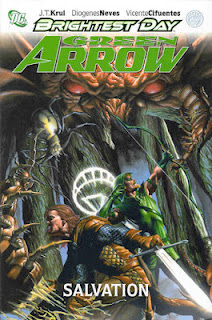 After the events of BRIGHTEST DAY, Oliver Queen has stood as the guardian of a mysterious forest that has sprouted in the middle of Star City! In this new volume collecting issues #8-15, Green Arrow defends the forest as a modern day Robin Hood from all that would do it harm. But how will Oliver's actions pave the way for Earth's new protector?
Posted by Blog Editor, The Association for the Advancement of Scholarship and Teaching of the Medieval in Popular Culture at 12:27 AM No comments: