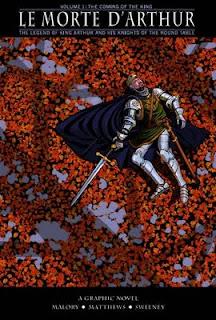 New from SelfMadeHero as part of their Eye Classics line, this graphic novelization of Malory presents the Arthurian story from the conception of King Arthur to the coming of Lancelot:

Le Morte D'Arthur: “The Coming of the King, Volume One” 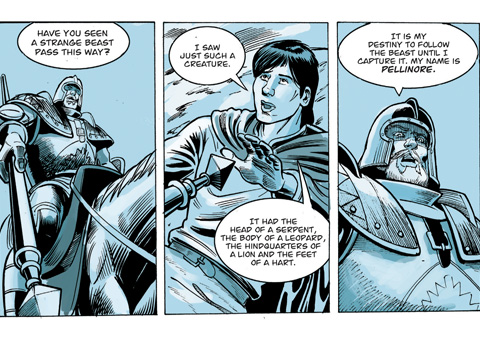 Product Description
The epic legend of King Arthur and his Knights of the Round Table is re-imagined here as a visually stunning graphic novel adapted by John Matthews and illustrated by Will Sweeney. This faithful reworking of Sir Thomas Malory's chivalric masterpiece introduces the young Arthur and charts his rise to power as King of Britain and the formation of his Knights of the Round Table. Aided by Merlin, Arthur must unite the kingdoms of Britain under his banner and take on adventures that will take him closer to his destiny and a danger caused by those he loves and trusts most.
Posted by Blog Editor, The Association for the Advancement of Scholarship and Teaching of the Medieval in Popular Culture at 1:29 AM No comments: 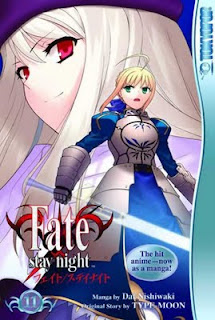 Despite the closure earlier this year of publisher Tokyopop, it seems that number 11 (May 2011) of the Fate/Stay Night manga was released and is available from a limited number of retailers. This issue is of particular interest in that it features a series of flashbacks to Saber's past as King Arthur, with appearances by both Merlin and Bedievere. There is also a section entitled "Pendragon" that features a dragon, which is (presumably) related to the Arthurian legend as well. In addition, as the current Holy Grail War continues, readers learn further details about the last war and its outcome.
Posted by Blog Editor, The Association for the Advancement of Scholarship and Teaching of the Medieval in Popular Culture at 12:50 AM No comments:

Knights of the Lunch Table #3 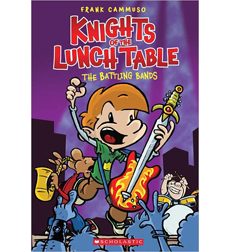 The Battling Bands, volume three of Frank Cammuso's Knights of the Lunch Table, was released earlier this month. Here are the details from his web site:

A battle is looming at Camelot Middle School--a battle of the bands, that is! Artie, Wayne, and Percy enter the talent show seeking fame and fortune. But only one of them plays an instrument: Percy. And he plays the tuba. Their only hope of winning is finding the long-lost "Singing Sword," the fabled instrument of awesome power.
But how can Artie find time to rock when he's been assigned a new lab partner, Melody Claymore? Melody is a klutz and a goof, and she harbors a not-so-secret crush on Artie. Is Melody his worst nightmare or secretly the answer to his prayers?

Paperback: 128 pages
Posted by Blog Editor, The Association for the Advancement of Scholarship and Teaching of the Medieval in Popular Culture at 10:40 PM No comments: 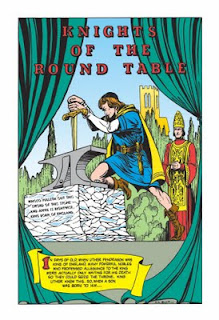 British publisher Classic Comic Store Ltd. has begun releasing reproductions of the original Classics Illustrated series, all with re-colored artwork and digitally enhanced cover art. Number 11 of their new line includes a reprint from 2009 of "Knights of the Round Table," which was originally published as Classics Illustrated No. 108 in June 1953. The book, which (as to be expected from a story from 1953) presents a bowdlerized account of the complete Arthurian story from Arthur's birth to his death and focuses on the adventures of Gareth, Galahad, and Lancelot, is nicely produced with crisp art and glossy white pages. Appendices include a history of the Round Table in medieval Arthurian literature, an overview of the Arthurian legend on film (and some TV), two versions of Arthur's genealogy (from Geoffrey of Monmouth and Thomas Malory), a short essay on the history of Excalibur, 5 questions to spark discussion on the Matter of Britain, and a timeline of Arthurian Britain.
Posted by Blog Editor, The Association for the Advancement of Scholarship and Teaching of the Medieval in Popular Culture at 10:32 PM No comments:

I came across the following last night on DriveThruComics.com:

Arthur: The Legend Continues (Cosmic Times) 1 & 2:
No. 1 tells of the death of King Arthur. No. 2 of his return in England's darkest hour.

Destiny of the Dragon: Daughters of Merlin (Jester Press Comics) 1, 2, & 3
At the fall of Camelot, Merlin gathers three women together, but they are separated when a band of dragons attack. The three are reunited centuries later and charged by Merlin (who is rather Doctor Who-like) to recreate the Round Table to save their universe.

Digital Visions (Visionary Comics) 2 & 4
No. 2 includes a preview of A. David Lewis's Gangland Avalon. No. 2 presents what I assume is the first story, which looks like we are being set up for a boy king/coming of King Arthur story. Gangland Avalon is a modern-day recasting /restaging of the legend in gangster/mob trappings.

Ex Occultus: A Matter of Britain (Saint James Comics)
The last days of an immortal Lancelot.

Posted by Blog Editor, The Association for the Advancement of Scholarship and Teaching of the Medieval in Popular Culture at 5:23 AM No comments: 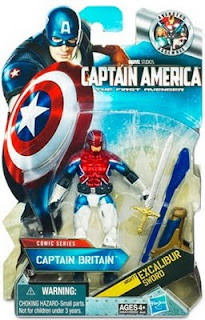 Marvel has released a new Captain Britain action figure as part of the Captain America: First Avenger line. Empowered by Merlyn, Captain Britain has long been associated with the Matter of Britain and comes with "Mighty Excalibur Sword". Yours for about $10 as the Marvel Store and elsewhere.

Captain Britain is a jack of many trades and a master of all. Strength, stamina, flight and invisible force field - your Captain Britain Action Figure has got everything he needs to battle villains all across the globe.

Poseable
Includes Clip-on Rocket Blaster and Excalibur Sword
Plastic
Figures in this series approximately 3 3/4'' H. Individual size may vary
Ages 4+
Imported
Part of the Captain America: The First Avenger Comic Series, each sold separately
WARNING: CHOKING HAZARD - Small Parts. Not for children under 3 years.
Posted by Blog Editor, The Association for the Advancement of Scholarship and Teaching of the Medieval in Popular Culture at 6:45 PM No comments: 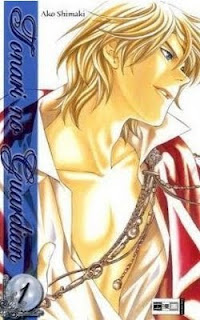 Ako Shimaki's Tonari no Shugoshin is an Arthurian-themed manga originally serialized in 2007 and presents the domestication of Lancelot by a teen-aged girl living in modern Japan, a storyline that offers a counterpoint to the Fate/stay night anime (also from 2007) in which a female Arthur is brought forward in time and domesticated (in part) by a teen-aged boy. In Tonari no Shugoshin, Lancelot is magically brought into the present and, though he often slips back into knightly behavior, he quickly assumes the guise and costume of a high school student. Much of the series is devoted to the girl's shifting feelings towards Lancelot, and Shimaki includes some graphic scenes (thus making this yet another example of what Elizabeth S. Sklar has labeled "naughty Arthuriana") as the two attempt to resolve their relationship. The manga has been collected by Egmont and released, unfortunately only in German (with a translation by Christine Steinle), as a two-volume series, re-titled Tonari no Guardian, available through Amazon.co.uk. The series can also be read in English through various fan sites, like MangaFox. I first came across mention of the series in John Lance Griffith's essay "Integration and Inversion: Western Medieval Knights in Japanese Manga and Anime" published online in the Korean journal Medieval and Early Modern English Studies 17.1 (2009); Grifith offers a summary of the manga and an analysis of its use of the Arthurian legend.
Posted by Blog Editor, The Association for the Advancement of Scholarship and Teaching of the Medieval in Popular Culture at 11:33 PM No comments: 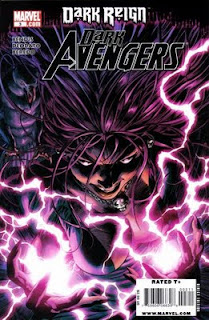 Marvel has recently re-released the Dark Avengers as an oversized collected edition (2011). An enraged, time-traveling Morgana le Fay features in their first outing (Dark Avengers Nos. 1-4) in which Norman Osborne and his Avengers battle the Arthurian sorceress to save the life of Victor Von Doom, Morgana's sometimes ally. The initial arc is also included in Dark Avengers: Assemble (2009).
Posted by Blog Editor, The Association for the Advancement of Scholarship and Teaching of the Medieval in Popular Culture at 12:51 AM No comments:

Lucid (Archaia, May 2011) from Michael McMillan and Anna Weiszcyk is set on an alternate Earth where magic works--and Merlin has inspired the formation of a league of good mages--and pits a descendant of John Dee against a group of evil mages that plot to create their own version of King Arthur reborn. From writer J. T. Krul, DC's recent Green Arrow (2010) ties into the Brightest Day series and introduces a character named Galahad, who may (or may not) be the Arthurian knight reborn/returned. The first seven issues of the series has been collected in Green Arrow: Into the Woods.
Posted by Blog Editor, The Association for the Advancement of Scholarship and Teaching of the Medieval in Popular Culture at 12:28 AM No comments: