Reprint Collections You May Have Missed

I still need to catch up on recent Captain Britain collections, but these are also of interest: 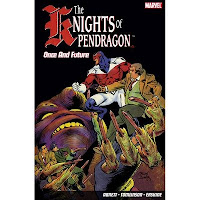 Knights of Pendragon was published in the early 1990s by Marvel UK and presents a band of heroes recruited by the Green Knight and empowered by the eternal spirits that once empowered the Knights of the Round Table. This arc features an adaptation of Sir Gawain and the Green Knight as an ecological allegory. The collection includes two introductions by series writers Dan Abnett and John Tomlinson who comment on the genesis of the series and its development. 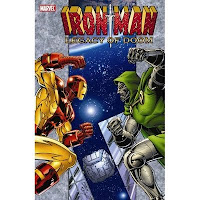 A more recent series, Iron Man: Legacy of Doom series as a follow-up to the Iron Man: Doomquest collection and presents Iron Man and Doctor Doom third (technically fourth if you count the Heroes Reborn books) encounter with Morgan le Fay and Merlin. In this series Doom secures Excalibur and seeks to recover its scabbard in an effort to save the Earth from an extra-dimensional threat.
Posted by Blog Editor, The Association for the Advancement of Scholarship and Teaching of the Medieval in Popular Culture at 9:38 PM No comments:

From the Mile High Comics NICE database (thanks to Jason Tondro for the head's up on Demon Knights):

Mike Mignola (W/Cover), Duncan Fegredo (A), Dave Stewart (C), and Francesco Francavilla (Variant Cover) War ensues between the forces of good and evil as Hellboy finally confronts the Queen of Blood one on one, setting the stage for a new chapter in Hellboy's life!

Mike Mignola (W/Cover), Duncan Fegredo (A), and Dave Stewart (C) While Hellboy makes one last stand against the Queen of Blood the war between the forces of good and evil rages on the battlefield with heaps of dead monsters and knights!

Mike Mignola (W/Cover), Duncan Fegredo (A), and Dave Stewart (C) With her tower in ruin, and her body a vessel for the Ogdru Jahad, the Queen of Blood shows no mercy to Hellboy as their final battle meets a stunning conclusion! The conclusion of the epic story that began in 2007's Darkness Calls. 'Everything in Hellboy for the last ten years or so has been building to something big-and this could be it. I can't wait.'-Comic Book Revolution

[Hellboy is descended from Mordred (and thus also his parents, King Arthur and Morgan le Fay). He has recently met Merlin and Morgan, been tasked as Arthur's successor, and challenged by Nimue, the Queen of Blood.]

Written by PAUL CORNELL Art by DIOGENES NEVES and OCLAIR ALBERT Cover by TONY S. DANIEL Set in the Dark Ages of the DC Universe, a barbarian horde is massing to crush civilization. It's fallen to Madame Xanadu and Jason Blood, the man with a monster inside him, to stand in their way - though the demon Etrigan has no interest in protecting anyone or anything other than himself! It'll take more than their own power to stop an army fueled by bloodlust and dark sorcery, and some very surprising heroes - and villains - will have no choice but to join the fray!

[Jason Blood is a servant of Merlin, Etrigan is Merlin's half brother, and Madame Xanadu is the Lady of the Lake and sister to Morgan le Fay.]
Posted by Blog Editor, The Association for the Advancement of Scholarship and Teaching of the Medieval in Popular Culture at 11:10 PM No comments:

CFP Comics Get Medieval at Kalamazoo

The call for papers for our roundtable on The Comics Get Medieval at Kalamazoo: New Perspectives for Incorporating Comics into Medieval Studies Teaching and Research has been posted to the Medieval Comics Project Blog.
Posted by Blog Editor, The Association for the Advancement of Scholarship and Teaching of the Medieval in Popular Culture at 4:14 PM No comments: